ERIG and the other Scottish Parkinson’s Research Interest Groups are delighted to host a public lecture by Nobel Laureate Prof. Randy Schekman.

Royal College of Physicians of Edinburgh, Saturday 11 June 2022, doors open at 3:00pm.
The title of Prof. Schekman’s lecture is “Parkinson’s Disease – up close and personal.” 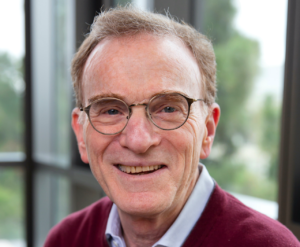 Prof. Schekman will start his lecture with a personal story (his wife had Parkinson’s) and will then give a presentation on the evolution and structure of Aligning Science Across Parkinson’s (ASAP) – an international effort that he directs devoted to accelerating the pace of discovery and informing the path to a cure for Parkinson’s. Prof. Schekman was joint winner of the 2013 Nobel Prize in Physiology or Medicine for his work on cellular vesicle trafficking. Failure of this process to work normally is now believed to be a key feature in the development of Parkinson’s.

120 socially distanced places are available for a live audience in the 300-seat auditorium. The lecture will also be livestreamed online.

For more information and to register for the LIVE EVENT

To register to watch the lecture ONLINE

Dr Miratul Muqit  from the University of Dundee  gave a talk entitled: Genetic Parkinson’s: Studying the few to treat the many on Saturday 1st December at the Scottish Centre for…

A meeting was held at SCRM on Saturday 22 September, 2012 and featured a talk by Gill Baer and Jane Hislop of Queen Margaret University, Edinburgh, entitled: Parkinson’s Disease and…

A very successful and well-attended medication workshop was held on Wednesday 22 February 2012. Discussions were led by Alison Stewart, Senior Parkinson’s Nurse at the Royal Victoria Hospital, and Alison…

Notes from the September 2011 meeting of the Research Interest Group

Notes from the Inaugural Meeting of the Research Interest Group, July 2, 2011