How is coronavirus affecting our operations? Learn more
Reports from local research events How smell led to a test for Parkinson’s

This online ERIG meeting was held on Saturday 28th November at 10:30 and was attended by 30 members. The main talk was given by Prof Perdita Barran, Chair of Mass Spectrometry in the School of Chemistry and Director of the Michael Barber Centre for Collaborative Mass Spectrometry at The University of Manchester. This research was done in collaboration with Joy Milne and Tilo Kunath.

The title of Prof Barran’s talk was: How smell led to a test for Parkinson’s.

Joy Milne started the session by describing how she came to realise that she was able to smell Parkinson’s on her late husband, Les. At a Parkinson’s Awareness event in 2012 she asked Tilo Kunath whether the scientific basis for this smell was being investigated.

Tilo took up the story and described how, in a properly controlled trial, Joy was able to correctly identify t-shirts worn by People with Parkinson’s (PwPs) from identical shirts worn by control individuals. The smell was present in the sebum, a skin secretion that we all produce.

View a pdf of Tilo’s Slides

Prof Barran then explained how it was possible to make extracts of the sebum and identify the molecules present by using mass spectrometry. Altered levels of some lipid (fatty) molecules were identified in the sebum of PwPs and these differences were used to develop a test for Parkinson’s that was able to identify individuals in the earliest stages before any of the classic Parkinson’s symptoms became apparent.

Additional analyses of the molecules in the sebum made it possible to build a picture of altered metabolic processes in PwPs that connected these altered lipid levels to malfunctioning in the mitochondria-the tiny energy generating structures found in all our cells. Changes in nerve cells leading to an inability to recycle damaged mitochondria is believed to be a key feature of Parkinson’s. 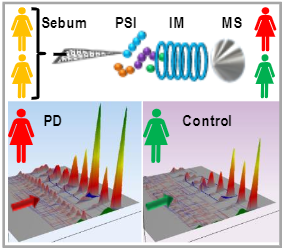 An audio file of the meeting is available:

You can listen to this as you look through the slides. If you do, the audio file goes quiet after Prof Barran’s talk ends at around 50 minutes, to allow for a short comfort break, before resuming for a lively Q&A session.

Thanks to Prof Barran, Joy and Tilo for an excellent demonstration of how our local Parkinson’s community can collaborate with Parkinson’s researchers to make important advances.