Inaugurated in 2012, the Edinburgh Parkinson’s Lecture has become a flagship annual event for the Edinburgh Branch and for the wider Parkinson’s community in Scotland. Each year the Lecture attracts internationally renowned experts to inform and educate a live audience and to review progress in the fight against Parkinson’s.

This was the 10th anniversary of the establishment of the Edinburgh Parkinson’s Lecture. Professor Roger Barker (pictured below) delivered the inaugural Lecture in 2012 and we were delighted to welcome him back to give the 10th anniversary Lecture. He is Professor of Clinical Neuroscience at the University of Cambridge and Consultant Neurologist at the Addenbrooke’s Hospital Cambridge. 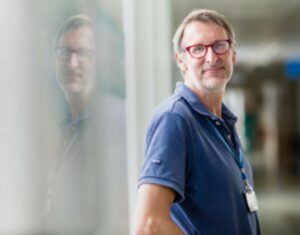 This year the Lecture once again took place as a LIVE STREAMED ONLINE EVENT, followed by a live Question & Answer session. 1000 people registered to watch the Lecture live! 65% of the audience either had Parkinson’s, or were a family member or carer of someone with Parkinson’s.

The programme began with our Vice Chair, Patrick Mark, describing the background to the establishment of the first Lecture in 2012.

The title of Prof. Barker’s Lecture was: What Has Changed in Parkinson’s Since My Last Talk in 2012: A Personal Perspective.  The lecture took place on 7th October 2021.

Prof. Barker described the better understanding that we now have about the complexity and progression of PD and the important role played by inflammation. He explained that there were now better ways to trial possible disease modifying therapies, including the repurposing of already licensed drugs. There was greater understanding of how misfolded aggregates of the normal nerve cell protein alpha-synuclein could spread the disease. He ended the Lecture by describing the start of a large series of new trials of advanced therapies, including his own work on cellular therapies using stem cells.

In the following Q&A session, expertly chaired by Tilo Kunath, Prof. Barker spent more than 30 minutes giving clear and simple answers to a wide range of questions from the audience. He also gave his top five tips for People with Parkinson’s.

The Lecture was organised and funded by the Edinburgh Branch of Parkinson’s UK.