How is coronavirus affecting our operations? Learn more
News The Long Walk Arrives on Monday….

We previously confirmed that the walk with Bill Bucklew and John Maphee would reach Edinburgh on Monday 20th September (tomorrow afternoon).

They expect to reach the South end of the Forth Road Bridge between 4 and 5.00pm, and they will walk via the B924 road to Barnton roundabout.  After that, they walk along Queensferry Road to Princes Street.

On Tuesday they plan to depart Princes Street at 7.00am and heading along the A7 towards Gorebridge.

It would be really fantastic if as many as possible could turn up along the route and cheer them on.  Is this something you could do?  The image shows the route for tomorrow, and 40 miles is no mean feat (likely leading to sore feet!). Some encouragement would be really appreciated. 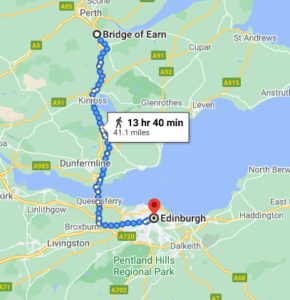