How is coronavirus affecting our operations? Learn more
News Congratulations to Paul Mayhew-Archer

“VICAR of Dibley writer Paul Mayhew-Archer is among the celebrity names in the county honoured in the Queen’s Birthday Honours list.  The Drayton resident, has been made a Member of the Order of the British Empire (MBEs) for services to people with Parkinson’s disease and cancer.  The 67-year-old, who co-wrote the hit show alongside Richard Curtis, was diagnosed with Parkinson’s almost a decade ago.

Steve Ford, chief executive at Parkinson’s UK, said: “Paul has been an incredible advocate for the Parkinson’s community. He is a role model for so many people with the condition, trusted to speak honestly about what living with Parkinson’s means for him and admired for his dedication to remain positive in the face of adversity.”  He added added: “His passion to inform people about what it’s like living with a complex, progressive condition is inspirational. We are thrilled that Paul’s tireless efforts have been recognised in this way, and send him many congratulations and thanks for everything he continues to do for the 145,000 people living with Parkinson’s in the UK.”  (Source: Herald Series, Oxford)

It was in 2018 that the Branch saw the beginnings of a continuing relationship with Paul, when he came to the Edinburgh Fringe with his one-man show “The Incurable Optimist”. The Branch hosted a tea-party at the Botanic Cottage for Paul and his wife, Julie.

Paul returned with his show in March 2019 when we collaborated with Fife Branch to host a pre-show gathering for the couple, again reflecting our strong inter-branch relationship. 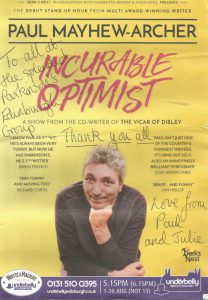