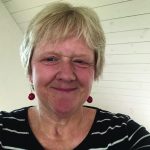 Annie Macleod has taken up the role of Scotland Direcor following the move by her predecessor, Katherine Crawford, to a UK-wide role within the charity. Annie brings a wealth of health and social care experience that’s seen her develop from her start as a trainee nurse then midwife in Scotland to a series of senior management roles with, among others, the Joseph Rowntree Foundation, Sue Ryder and the NHS in England. Most recently Annie returned to Scotland to be Oban, Lorn and the Isles Locality Manager for the Argyll and Bute Health and Social Care Partnership.Annie lives with her husband on the Morvern peninsula, north west of Oban. She has two grown up daughters – one is a junior doctor and the other works in social policy research. Annie says:

“It is a great privilege to take up this role with Parkinson’s UK. People with or affected by Parkinson’s had a key decision-making role during the recruitment process and it’s exciting to be joining an organisation that puts people with the condition front and centre.

“Last week we announced that the numbers of people in Scotland with Parkinson’s had increased to more than 12,000. This figure is set to double within two generations and presents a real challenge for health and social care providers.

“My job is to help the fantastic team of Parkinson’s UK staff and volunteers in Scotland ensure that people affected by the condition have access to the services they need. With budgets and services already stretched it’s vital that providers plan and prepare for the rising numbers of people living with the condition.

“It is sobering that 1 in every 375 adults has the condition. And more than 10,400 of those people are over 65, many experiencing falls or unplanned admissions to hospital. Strengthening our work in reaching out to everyone affected by Parkinson’s is ever more critical.

My first step is to listen to what the Parkinson’s community in Scotland has to say and I’ll be out and about meeting as many people and local support groups as possible. I look forward to working with them, and with our partners in the health, scientific and social care sectors across Scotland.”

To get in touch with Annie